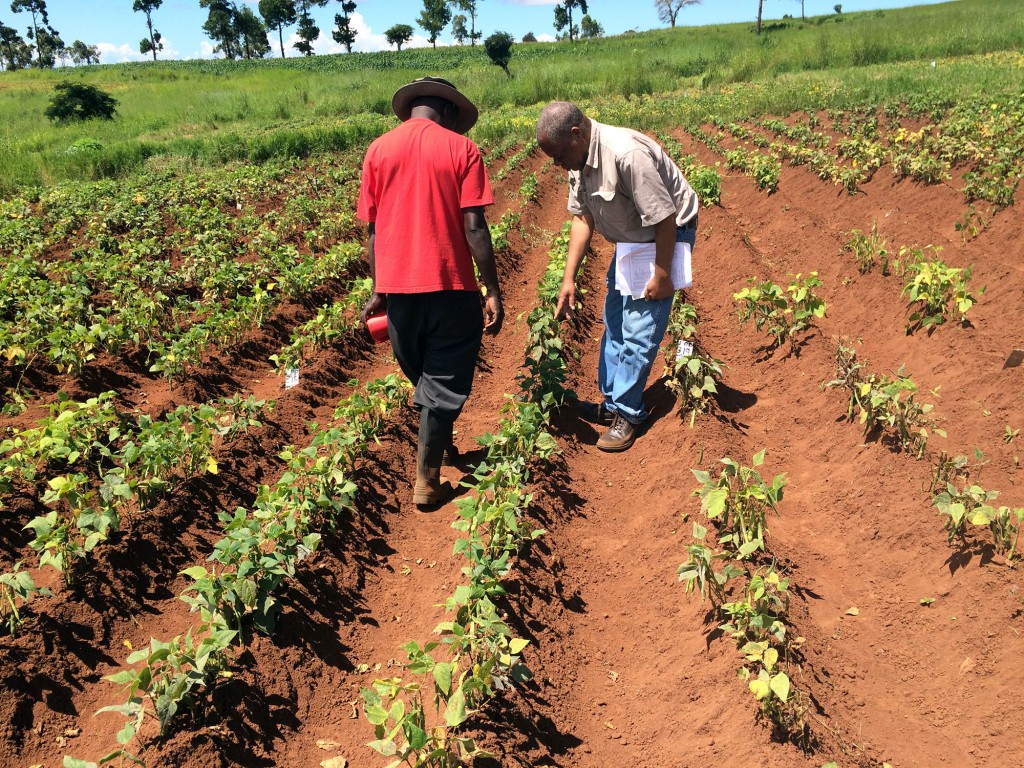 Beans are an important crop in Malawi both nutritionally and for income generation, however, production does not meet the demand and with actual yields (400 kg ha-1) well below potential yield (2,000 kg ha-1). The major yield constraints range from poor agronomic practices, soil infertility, lack of improved cultivars, and drought. To this end, a program for common bean improvement was initiated for Malawi under the Feed-the-Future Grain Legumes program with Bunda College titled “Advancing dry bean germplasm and cultivar development for resource poor farmers in Malawi.” Bunda College is a campus of the Lilongwe University of Agriculture and Natural Resources (LUANAR) located 30 km from Lilongwe.

The project started in the 2014/2015 crop growing season through testing of Andean Diversity Panel (ADP) lines, Phaseolus Improvement Cooperative (PIC) breeding populations, and National Bean Yield Trials (NBYT). The ADP lines were grown at two sites, Bunda and Bvumbwe. The PIC populations were grown at three sites: Bunda, Bvumbwe, and Bembeke. The National Bean Yield Trial (NBYT) was grown at five sites: Bunda, Bembeke, Bvumbwe, Kasungu, and Champira and were composed of materials from the Bean/Cowpea CRSP project conducted from 2004 to 2007. These materials will be tested for their potential for release as new cultivars in Malawi. The seed types ranged from small- to large-seeded and from solid to mottled seed coat colors. The lines are a mix of Andean and Middle American lines and a variety of seed types including black, small red, carioca, brown, sugar cranberry, large red and red mottled.

The 2014/2015 crop growing season was an unfavorable year for crop growth and production. It was characterized by heavy rains at the beginning leading to floods in some areas, followed by terminal drought to end the season. These conditions affected yields of many crops including beans. Bean yields were below average which made evaluation of materials challenging, however important phenotypic data were collected and selections made.

A total of 480 single plant selections were obtained from 35 PIC populations. About 8 to 10 F4 plants were selected from each PIC population, planted in three replications, at the Bunda and Bvumbwe locations. Fewer selections were completed at the Bembeke location due to an unfavorable growing environment resulting from soil infertility, disease pressure and drought. The F5 plant rows from F4 plants were then planted in collaboration with Deidre Fourie at the ARC in South Africa. About 390 F5 progeny lines were selected from the generation advance in South Africa and sent to Malawi for evaluation during the 2016 field season.

Plans for the 2015/2016 growing season include continued evaluation of the ADP and continued selection from PIC populations. In addition, a new set of 35 PIC populations will be evaluated that will feed into the National breeding program. National yield trials on advanced lines will also be conducted that include the eight best lines from 2014/2015 combined with a new set of eight lines from preliminary yield trials. Overall this collaborative project is nearing the key objective of releasing germplasm or cultivars for bean production in Malawi.