In the trials at Cedara, the principal disease was scab with both pod and leaf symptoms identified (photo below), but halo blight, rust, and angular leaf spot (ALS) were also found. An advanced first-generation of PIC population selections, with 80 entries in 3 replications from populations 1 to 153, were evaluated for potential release. A second set of PIC selections, from a second generation of PIC populations 154 to 275 and composed of 677 lines, were also evaluated in 3 replications. All plots were evaluated for pod load (1-9 scale), maturity (1-3 scale), and disease response (1-9 scale) and preliminary selections were completed.

At the Jan Kempdorp ARC Station in Vaalharts response to high temperature stress was evaluated. The bean trial at the Vaalharts field site was located at 27⁰56.759 S, 24⁰50.548 E and at 1162 masl and has average temperatures of 35-38⁰C (day) and 16-18⁰C night during the season. Visual ratings based on pod load were completed on the same set of 80 PIC lines as indicated above in three replications and on 285 lines (previously selected in Vaalharts) from the second generation mentioned above. In addition to pod load, disease response, maturity, and virus-like symptom data was also collected.

At the Potchefstroom trials of Deidre Fourie selections from the PIC breeding lines with a sugar or calima seed type were evaluated for potential release in South Africa. A number of these lines had promising yield potential in Potchefstroom. RILs from the Rojo x CAL 143 population combining multiple disease resistance were also evaluated for yield potential, seed type, and for potential release.

A subset of these PIC lines with commercial seed type will be evaluated in yield trials in South Africa, and sent to U.S. collaborators for phenotypic and genotypic evaluation and for potential release or use in breeding programs in the U.S.

The SO1.A4 Project of the Legume Innovation Lab held a workshop in Tegucigalpa, Honduras from July 25-27, 2017. The program and relevant presentations representing Central American/Caribbean regional bean research efforts are posted.  All workshop presentations available for download are in Spanish.  The summary of the workshop in available in English here. 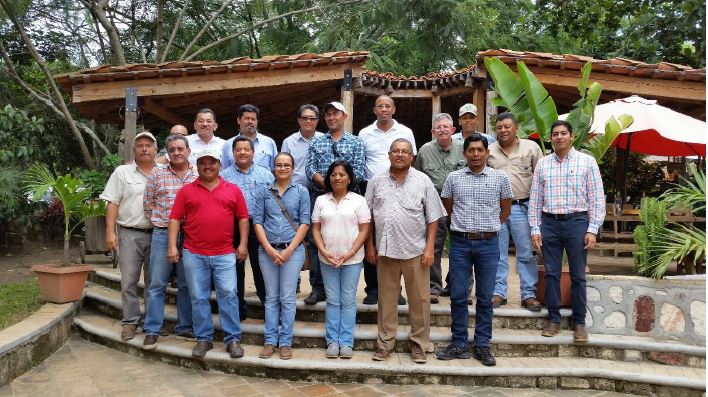 The Magical Fruit: Are heat- and drought-resistant tepary beans the future of food? 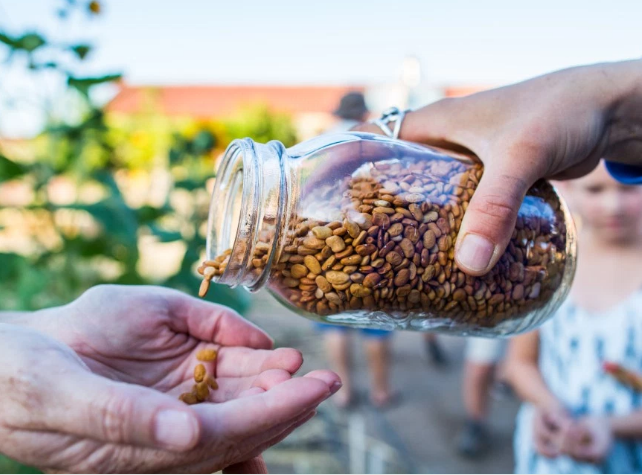 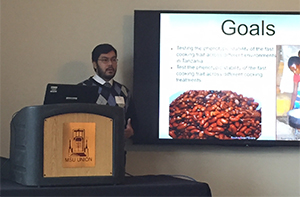 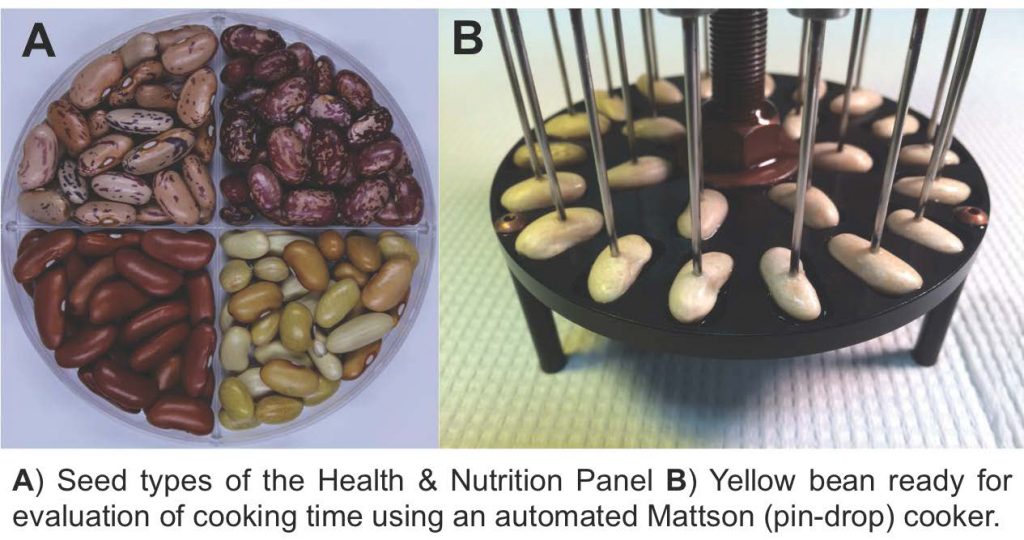 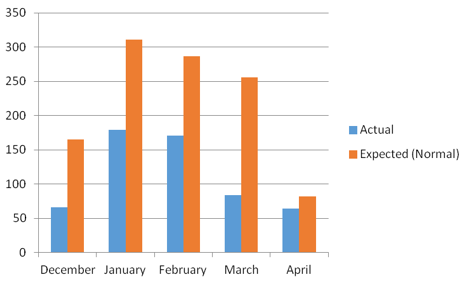 A subset of 10 Andean Diversity Panel (ADP) and 13 Durango Diversity Panel (DDP) lines that had been selected for good performance under biotic and abiotic stresses across Malawi, Tanzania, South Africa, Puerto Rico and the United States were planted at Bunda, Bvumbwe, MUST, and Chitala. The materials were grown in 4 row plots with three replications at each location. Phenological, yield and yield component data were determined.

The PIC population selections were planted at the same four sites (Bunda, Bvumbwe, MUST and Chitala). There were 282 lines planted as single row plots that were replicated three times. Plants were selected based on agronomic performance and tolerance to biotic and abiotic stresses in the field at the pod-filling stage, followed by seed type at harvest.

The National Bean Yield Trials (NBYT) comprised materials from the Bean/Cowpea CRSP project conducted from 2004 to 2007. The seed types range from small- to large-seeded and from solid to mottled seed colors. The lines are a mix of Andean and Mesoamerican lines and a variety of seed types including black, small red, carioca, brown, sugar cranberry, large red and red mottled.

Drought had a profound effect on the trial performance resulting in loss of some trials at Bunda and MUST. The trials at Chitala were also drastically affected by drought and root rot. Bean common mosaic virus was prominent at Bunda and black-root reaction was observed in ABYT and ADP/DDP trials which contributed to poor stand apart from the drought that was experienced. PIC lines and the NBYT performed better in the second planting. Charcoal rot, caused by Macrophomina phaseolina, was the major disease at Bvumbwe in addition to drought stress, and the worst affected was the ADP/DDP trial (photo below). 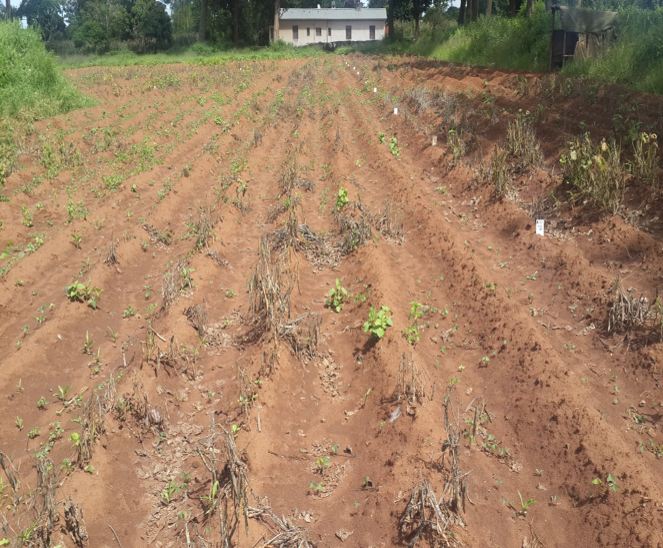 PIC selections were made mainly at Bunda and Bvumbwe but a few were also included from Chitala. Selections at Bunda and Bvumbwe were based on pod load and seed type. In Chitala, all plants that survived the drought and produced seed were picked. Out of 282 lines derived from single plant selections done in 2014/2015 cropping season, 82 lines (29%) were selected and sent to South Africa for seed multiplication and advance.

The results of NBYT at Bunda showed highly significant differences in yield. Lines PC543-C3 and DG 2 were the earliest to achieve full flowering while the lines F11 MDRB (B) 25 and F11 MDRB (B) 24 were the first to reach physiological maturity. The highest yield was observed for the Kalima variety (2,858 kg/ha) followed by UCD 0234 (2,444 kg/ha). The overall mean yield was 1,771 kg/ha. 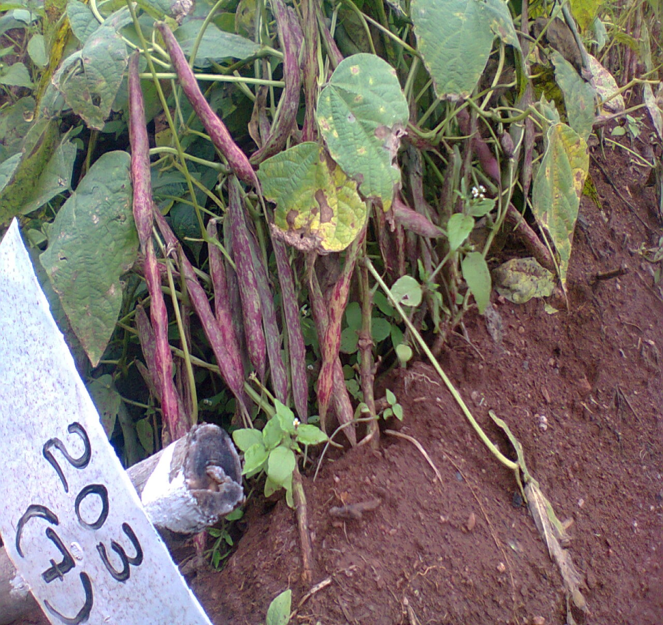 The NBYT results from the Bvumbwe Research Station showed highly significant statistical differences between the entries for days to flowering, days to maturity and 100 seed weight. There was no statistical significance in terms of grain yield among entries indicating similar yield performance. The earliest line to achieve physiological maturity was F12MDRB (A) 18 after 79 days. The top yielding line was F11MDRB (B) 24 (photo below) with 1,509 kg/ha followed by F3 MDRB (A) 8 with 1,378 kg/ha and UCD0234 with 1,365 kg/ha. The overall mean yield was 956 kg/ha.

The 2015/2016 crop growing season was challenging for crop growth and production. This was mainly due to drought. Trials from two of the sites, MUST and Chitala Research Station, were drastically affected and no data was collected. Two of the trials at Bunda, ADP/DDP and ABYT, recorded poor stands and this affected yield performance. Two trials, NBYT and PIC, had to be replanted at Bunda. Therefore, it is recommended that the ADP/DDP and NBYT be repeated in the 2016/2017 growing season. The PIC line selections sent to South Africa should be evaluated at multiple sites in order to determine their adaptation and to select outstanding entries for preliminary yield trials. Three lines from the NBYT, F11 MDRB (B) 24, DC 96-69 and DG 226, are being considered for release.

In this post you will find the complete program and relevant presentations in spanish, from the Abiotic Stress Workshop hosted by the U. of Puerto Rico and the Escuela Panamericana Agricola (Zamorano) at the UPR Substations in Isabela and Fortuna. The Workshop was funded by the USAID FtF Innovation Lab for Climate-Resilient Beans. 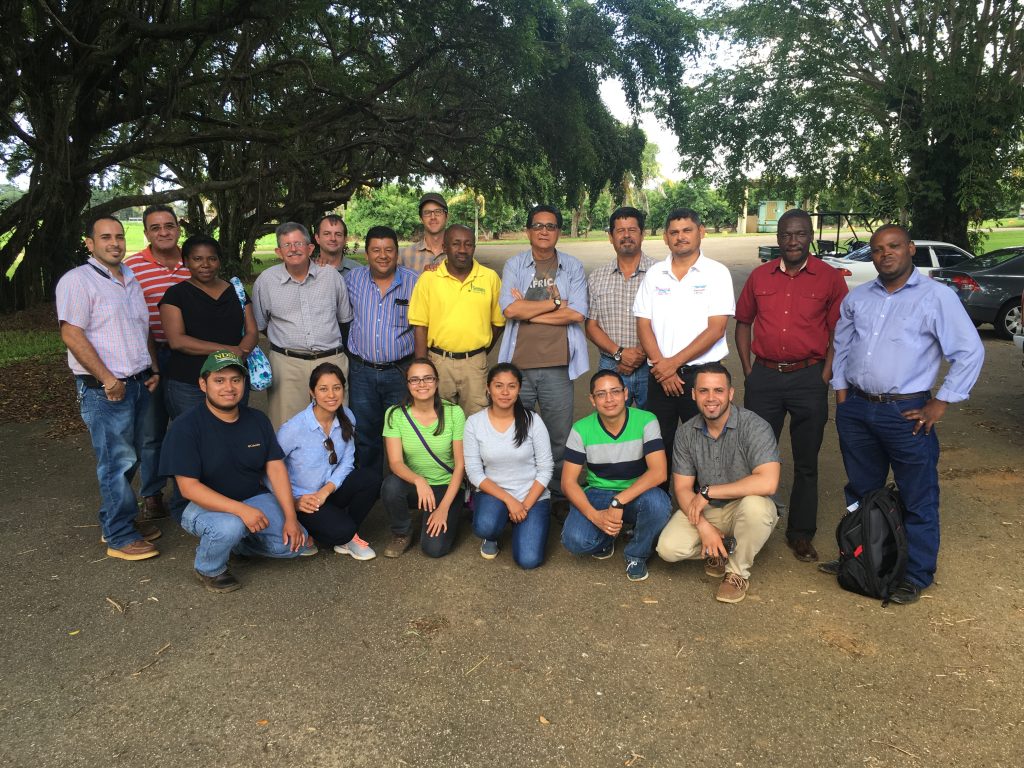 ARS scientists Phil Miklas, Karen Cichy, and Tim Porch participated in this trip focused on the evaluation of breeding lines in collaboration with Sokoine University researchers Dr. Susan Nchimbi. Significant progress was made in advancing breeding populations directed towards release of improved varieties in Tanzania. Thirty promising F4:7, 1st generation 2014 PIC (Phaseolus Improvement Cooperative) and ~100 F4:6, 2nd generation 2015 PIC breeding lines were selected. In addition, ~300 F4:5, 3rd generation 2016 PIC single plant selections were completed in Arusha and Mbeya (photos from Arusha below). These breeding lines, derived from 109 PIC populations specifically developed to combine abiotic and biotic stress tolerance, showed superior agronomic potential compared with checks and local landraces. The diversity, scale, and potential of the material in the PIC breeding pipeline is invaluable and requires continued support to ensure the release of varieties that promise to increase the productivity of common bean in the E. African region.

Twelve superior lines from ADP evaluations during previous years were evaluated in on-station trials in Arusha, Mbeya, and Morogoro, and in on-farm trials in the Arusha and Mbeya areas (photos below). The first village near Arusha was Kikatiti (District of Arumeru) where bush beans were preferred (left photo below). The second village was Sakila (in Arumeru as well). This village was at a higher elevation with higher rainfall and fertile soils. A high incidence of white mold was found at this site. About 17 male and 2 female farmers participated in an evaluation of the material in the 12 entry ADP field trial with the local extension agent, indicating their most preferred and least preferred lines (middle photo below).

The first village near Mbeya was Ivuanga, in the District of Mbezi. The 4 male and 3 female farmers had selected individual plants to present the characteristics that they preferred. Several of the ADP were mentioned in this discussion as having good potential including ADP 395, ADP 468, and ADP 111 (right photo below). The two local checks in this area are Wanja and Kigoma. In the field, ADP 479, a red mottled, Calima type also looked promising. A second location in the village was also visited. This site had noticably lower soil fertility and reduced vigor. At this site, ADPs 395, 462, 468, and 479 again looked promising.  A second village was then visited in the vicinity, Nambala. An enthusiastic group of farmers composed of 13 men, 6 women, and 5 children showed us their plots, that had been irrigated by hand, that were at mid pod fill stage. It was too early to evaluate the material for yield performance, but they did indicate that palatability of the leaves was an important characteristic. 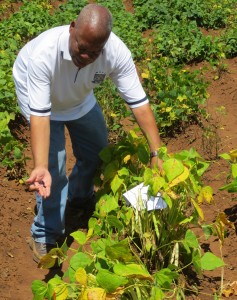 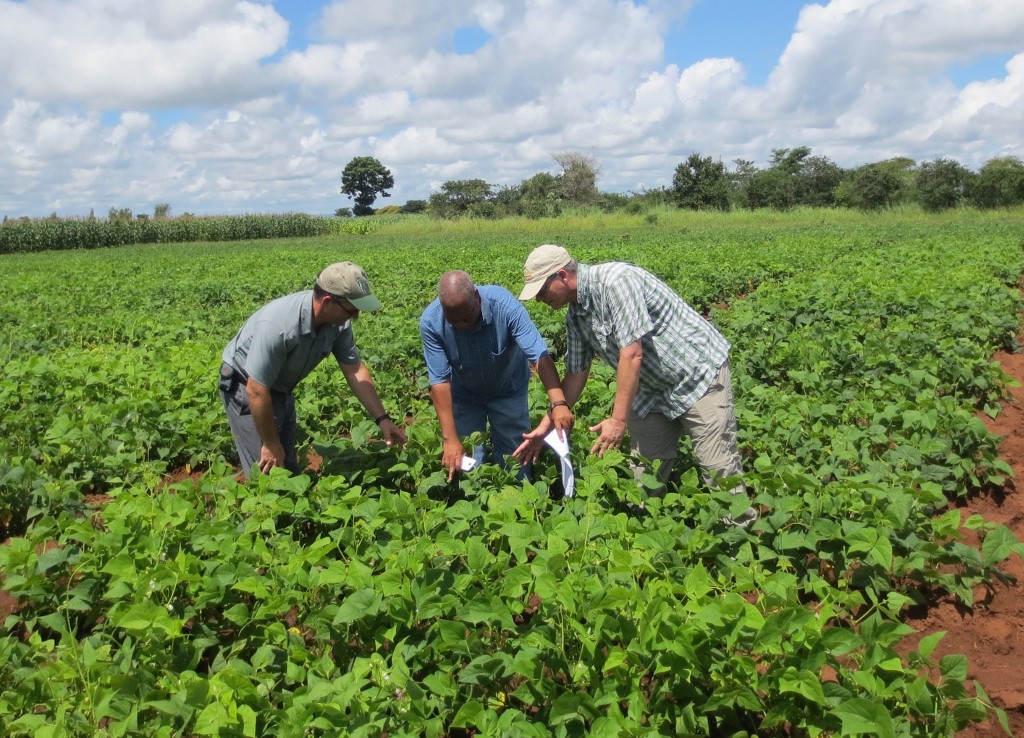