From 6/12 to 6/16/2019, advanced trials of lines from three generations of PIC (Phaseolus improvement cooperative) populations under consideration for release were evaluated at the Selian Station of the Tanzanian Agriculture Research Institute (TARI) and in on-farm trials in Arusha, and at the Uyole Station of TARI in Mbeya in collaboration with Drs. Susan Nchimbi and Luseko Chilagane of Sokoine University of Agriculture.

Due to initial and extended drought, the stands in the trial at Selian (Arusha) were affected and the planting was delayed, but plant stand and vigor data were collected. There was little disease pressure at the site. Superior Phaseolus Improvement Cooperative (PIC) lines (32 total) were evaluated in a combined trial and superior lines from two generations of selection included R11-7, 15 TZ MBY PIC 035-Row2, 15 TZ MBY PIC 038-Row4, and 15 TZ MBY PIC 040-Row1. ADP-447 (Yunguilla) and ADP-190 (Baetao Manteiga) showed superior vigor and yield potential in increases next to the trials. Mr. Alex Kisamo commented that he is impressed with ADP-447 for production in Tanzania. A subset of the DDP (with 8 entries) and a new pinto bean trial (with 59 entries) showed promise in comparison to the local pinto check.

On 6/13 we travelled to three villages in the Kilimanjaro area near Arusha, Sakila, Kwanangasha, and Nasholi, with two extension agents. Soils at all three sites appeared to be composed of dark volcanic soils. Visual ratings based on vigor and stand were completed on a superior set of 18 PIC lines from those indicated above and on the 8 DDP pinto lines at the three villages in two replications. The Sakila site was likely 250m higher than the other two sites and it was noted that this trial had received additional rainfall and weed pressure. The farmer at this site plants yellow beans. The Kwanangasha site had higher weed pressure in the 2nd replication. The farmer had dedicated part of her field to green gram for home consumption. The final trial, Nasholi, was far superior than the others in terms of plant stand and vigor, and it appears the trial had better weed control and had been fertilized. There will be farmer evaluation data collected near harvest maturity and yield data obtained as well in these three trials.

Photos from left to right of on-farm trials in villages in Arusha area: Dr. Nchimbi, two extension agents, and farmer at his farm in Sakila village (left); trials at Kwanangasha village (middle); and trials at the Nasholi village (right).

On 6/14 we travelled to the Mbeya site in the Southern highlands of Tanzania and on 6/15 Dr. Nchimbi and I met Michael Kilango at the Uyole Station in Mbeya for data collection. We were impressed with the good stands, vigorous plant growth, and advanced stage of the trials. These trials were planted 2-3 weeks earlier than the Arusha trials. The trials were also fertilized with urea at the flowering stage—unlike most of the other trials (except for the Nasholi trial). We collected ALS, rust (for some trials), overall agronomic performance, and in some cases plant stand data. Michael Kilango noted that farmers passing by the fields were interested by the ADP-447 increase and that some had requested seed of this line. PIC lines performing well in Arusha also performed well in Mbeya for the most part. Pinto performance was superior in Mbeya with some lines showing good adaptation, yield potential and disease resistance. A subset (20 RILs) from the CAL 143/Rojo RIL population (3 reps) and 158 RILS from the Bukoba/Kijivu RIL population (1 rep) were evaluated for ALS. The Iwanga village on-farm trial, in the Mbeya area, will be visited by collaborators for agronomic and farmer participatory evaluations.

The visit was effective in the selection of PIC lines for potential release in Tanzania and in the U.S. We plan to initiate the process for the release of ADP-447 and ADP-190 in Tanzania. The PIC performance between Mbeya and Arusha was remarkably consistent, with ADP-447, ADP-190, R11-7, 15 TZ MBY PIC 035-Row2, 15 TZ MBY PIC 038-Row4, and 15 TZ MBY PIC 040-Row1 continuing to perform well and being considered for release.

The prestigious Board for International Food and Agricultural Development (BIFAD) Scientific Excellence in a Feed the Future Innovation Lab Award was granted to Dr. James Beaver of the University of Puerto Rico and Dr. Juan Carlos Rosas of the Zamorano Panamerican Agricultural University in Honduras. Their outstanding, long-term collaboration, encompassing 30 years of research, has resulted in synergistic advances in pyramiding disease, abiotic and insect resistance in cultivars spanning Central America and the Caribbean, and has resulted in substantial gains in education, training and institutional development. 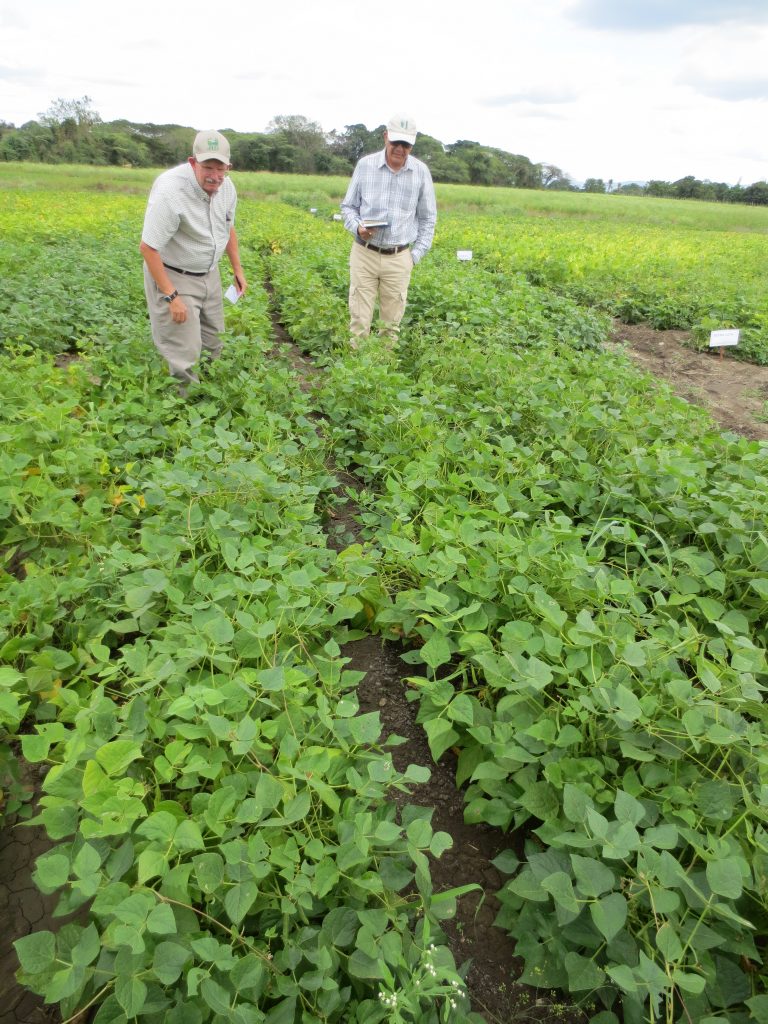 Bean golden yellow mosaic virus (BGYMV), a critical constraint to common bean production in the Caribbean and Central America, has been a central component of their breeding objectives. They played crucial roles to the early characterization and development of BGYMV resistant cultivars using germplasm developed at CIAT-Guatemala and the U. of Wisconsin in the 1980s and 1990s. This early progress has allowed for the current broad implementation of BYGMV resistance in common bean cultivars developed for the Caribbean and the Central American region. They have implemented an elevated standard for release of multiple virus resistant cultivars, through the pyramiding of BGYMV, BCMV, and BCMNV resistance, and the incorporation of accelerated breeding methods such as marker assisted selection. These recent efforts have resulted in releases of high yielding cultivars that combine general abiotic and biotic resistance in addition to this multiple virus resistance and include: ‘Sankara’, ‘Bella’, ‘MEN 2201-64 ML’, ‘Aifi-Wuriti’, ‘Beniquez’, ‘PR0737-1’ and ‘PR0806-80’. During the last period of this collaborative effort they have released over 23 cultivars and germplasms that will impact thousands of subsistence and commercial farmers throughout the region and many more consumers.

Instead of focusing solely on the genetic diversity available within common bean, Dr. Beaver and Dr. Rosas pursued the use of other Phaseolus species as sources for bruchid (or grain weevil) and heat/drought tolerance, specifically from tepary bean (P. acutifolius). This seminal work on bruchid (Acanthoscelides obtectus Say) resistance is a game changing post-harvest achievement as it alleviates rapid degradation of seed and grain quality in the tropics and subtropics, particularly affecting poor farmers. The germplasm developed from these efforts represent the first broad implementation of bruchid resistance in the development of cultivars of Andean and Mesoamerican seed classes. The recent release of the red mottled ‘AO-1012-29-3-3A’, that combines BCMV and BCMNV resistance with bruchid resistance, is a milestone in this effort.

Their early recognition of the potential detrimental effects of climate change on common bean production worldwide resulted in early breeding efforts focused on improving both drought and heat tolerance and in improving yield stability in current common bean production systems in Central America and the Caribbean. Through the establishment of new low-land tropical selection environments in locations like Nacaome, Honduras, summer season testing in Isabela and Juana Diaz, Puerto Rico, and in collaborative testing sites in other countries such as El Salvador and Guatemala, they have achieved significant advances in heat and drought tolerance. The recently collaborative release of ‘CENTA EAC’ in El Salvador, with higher yield potential under high temperatures and drought, follows the earlier release of the heat tolerant cultivar ‘Amadeus 77’, the most broadly grown common bean cultivar in Central America. In addition, the recent release of ‘Don Rey’ in Honduras and of ‘MEN2201-64ML’ in Haiti promise to improve common bean yields under increasing temperatures and drought, while also combining critical disease resistance traits. Additional traits, such as biological nitrogen fixation, low-fertility tolerance, and resistance to web blight are additional focal areas of their research collaborations where significant advances have been made.

In addition to the development of scientific innovations that have had broad impact in the common bean sector, Drs. Rosas and Beaver have provided innovative leadership for scaling-up and disseminating these innovations through technology transfer. One key application has been the development and promotion of local seed multiplication systems in Haiti and Central America to ensure that smallholder farmers have access to quality seed of varieties with improved genetics. Dr. Rosas is specifically recognized for his leadership in and advocacy of participatory plant breeding approaches.  As a result, these methods are utilized worldwide by grain legume breeders because of the value of farmer input in trait selection and of improved adoption of farmer-researcher collaborative cultivar selections. The widespread demand in Honduras for the newly released cultivar ‘Parasito Mejorado 2- Don Rey’, a small-red seda seed type with excellent adaptation to the agro-ecologies of the region, is an example of the effectiveness of the participatory breeding approach.

As a community we congratulate Dr. Beaver and Dr. Rosas for their outstanding research advances, their extensive training and education contributions, and their example as to what can be achieved as a collaborative team. Their contributions as a collaborative team to the common bean research community, and more importantly to farmers worldwide, are greatly appreciated.