In collaboration with the University of Puerto Rico, Basin Seeds Inc. (Idaho), and USAID, the USDA-ARS Feed-the-Future Grain Legumes Project shipped over 12 tons of ‘Sankara’ black bean seed to Haiti that arrived on Nov. 16, 2016. This seed, urgently needed due to hardships caused by Hurricane Matthew, was produced with the goal of testing a model for providing a secure, annual supply of high quality, disease-free, Western U.S. grown common bean seed to countries such as Haiti that have a perennial shortage of seed and are vulnerable to extreme weather events including droughts, tropical storms and hurricanes. 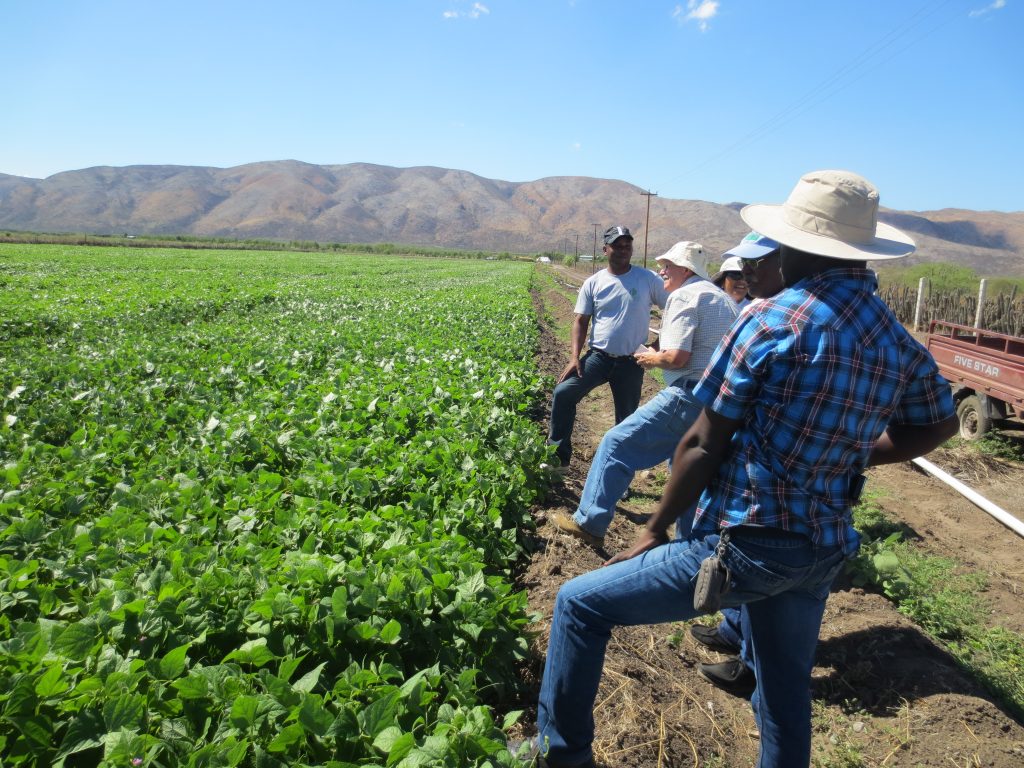 Seed increase of Sankara in February 2014 at the Hands Together NGO in Gonaives, Haiti. In the photo are Jim Beaver and Consuelo Estevez of the U. of Puerto Rico, Emmanuel Prophete from the National Seed Service of Haiti, and several technicians from the NGO.

‘Sankara’, tested as XRAV-40-4 and released in Haiti in 2015 has good yield potential and resistance to BGYMV (Bean Golden yellow Mosaic Virus), BCMNV (Bean Common Mosaic Necrosis Virus) and BCMV (Bean Common Mosaic Virus), key viral diseases in Haiti. ‘Sankara’ has exhibited early maturity and superior yield in the highlands of Haiti during the summer. Dr. James Beaver sent 30 lbs. of Breeder Seed to Dr. Phil Miklas and 1,000 lbs. of Foundation Seed was obtained in a field planting in Othello, Washington during the summer of 2015. The line was well adapted, early maturing, and produced high-quality seed in Washington at a multiplication rate of 30. This Foundation Seed was inspected and certified by Washington State Department of Agriculture and later accepted by Idaho State Department of Agriculture for increase in Idaho by the Basin Seed Company.

Dr. Ron Riley and Mike McKenna, co-owners of Basin Seed Company in Nampa, Idaho, planted the Foundation Seed of ‘Sankara’ and produced 27,000 lbs of Certified Seed in September, 2016. The seed is disease-free, high quality and genetically pure with 92% germination and 99.98% purity. Through expedited cleaning, processing, and packaging in 50 lb bags with a Haitian Creole label, Basin Seeds was able to ship 500, 50 lb bags to Haiti on 7 October, arriving in Haiti on 16 November and in time for the November/December 2016 Winter planting season. This is sufficient seed for almost 500 acres during the irrigated winter season in Haiti. A modest yield of 1,200 lbs/acre would produce a sufficient amount of seed of ‘Sankara’ to be planted on small-scale farms in the mountains during the summer of 2017 on over 9,000 acres.